Raising the bar for an F&B restobar inspired by streets

A high-street resto bar that sits high on the terrace overlooking the overcrowded streets of Koramangala, Bangalore.

Bangalore has seen a sudden rise in the number of themed pubs and restaurants popping up everywhere. Having travelled across Europe extensively, from Germany to Austria and Poland to Switzerland, the owner at Liquid Street, Mrs Theja Reddy was trying to recreate some of the best experiences she had while on these trips.

Mrs Theja Reddy’s vision was simple—disrupt the culture of indoor drinking with experience of outdoor. An idea inspired by the alfresco drinking culture of Europe. The result? She created Liquid Street—a bar and grill franchise in Bangalore for a revolution in the way people drink.

Liquid Street is inspired by the panache of Europe. It resembles a road map where there are quirky signposts and ravishing furniture. What makes it special is the powerful sense of fantasy. This place is amazing all the time, whether you want to hang out there during the day or at night.

The concept of Liquid Street was to create an open air, drinking street. It was inspired by the lanes and alleyways of Europe, where pubs and bars are aplenty and you can easily stroll down to find a pub or a bar. The Bangalore culture of drinking in alfresco and around courts had also not died, so while thinking of the theme we decided it would be something that would have alleyways where you walk in as if entering a different world. 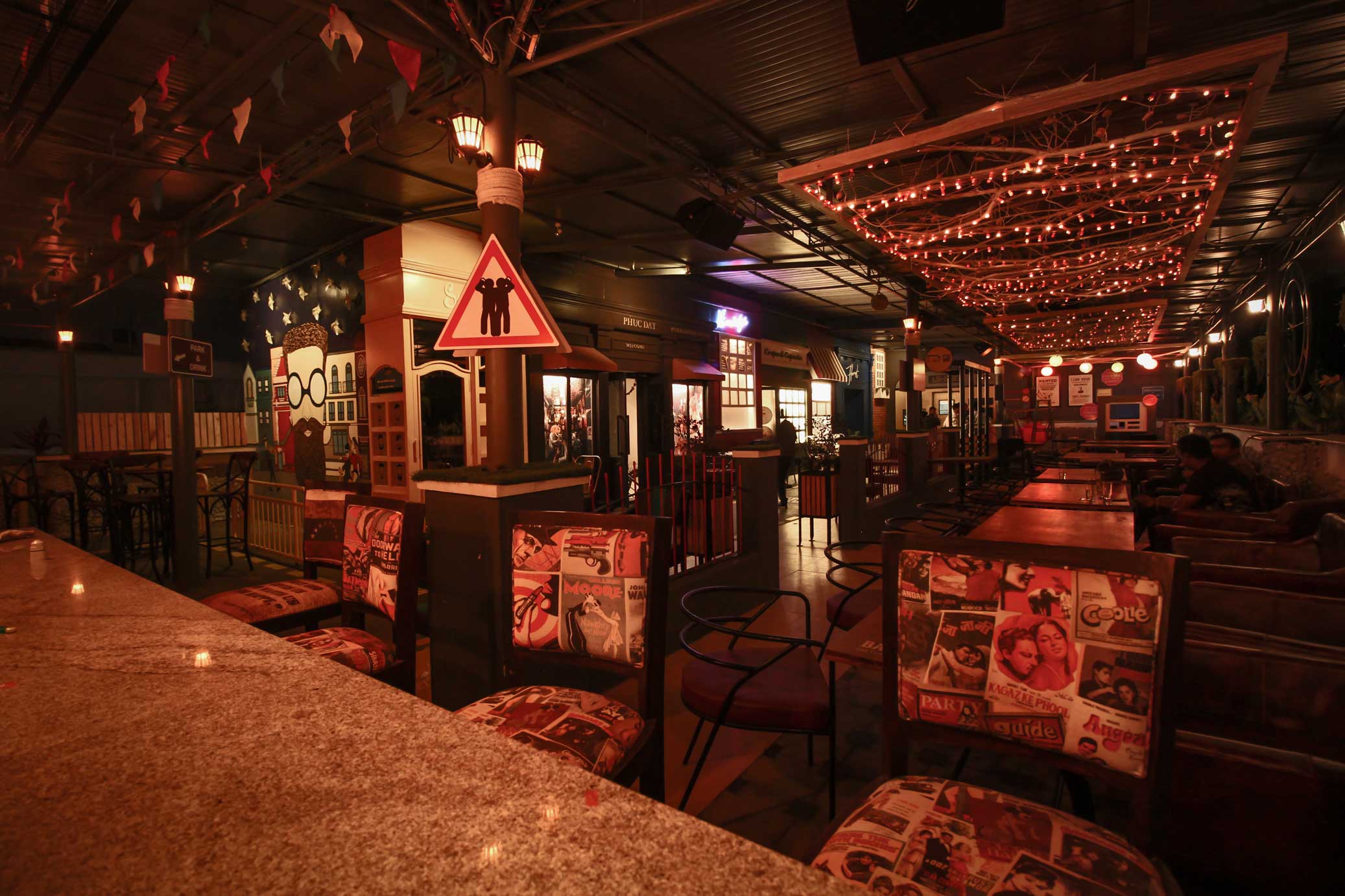 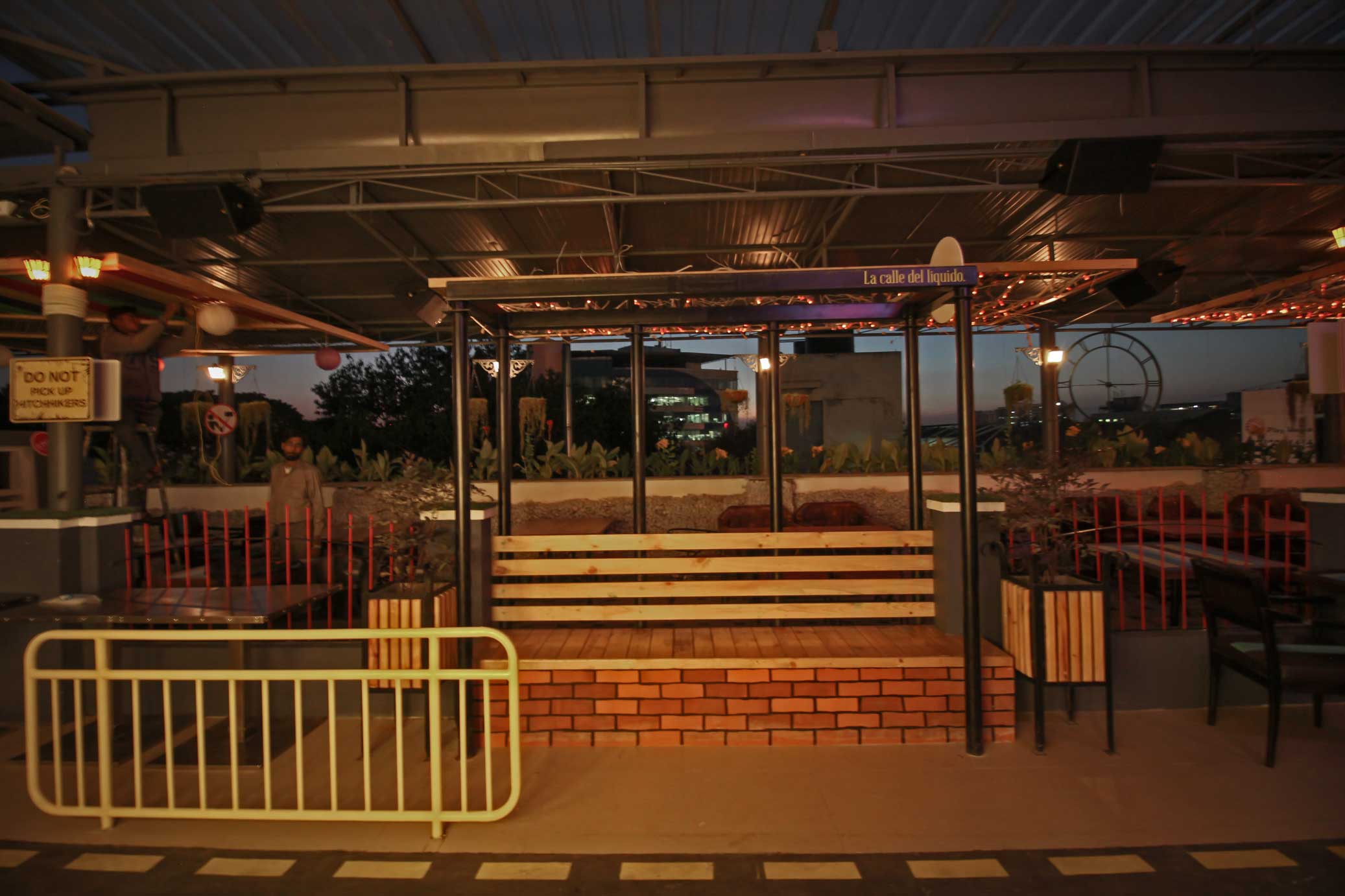 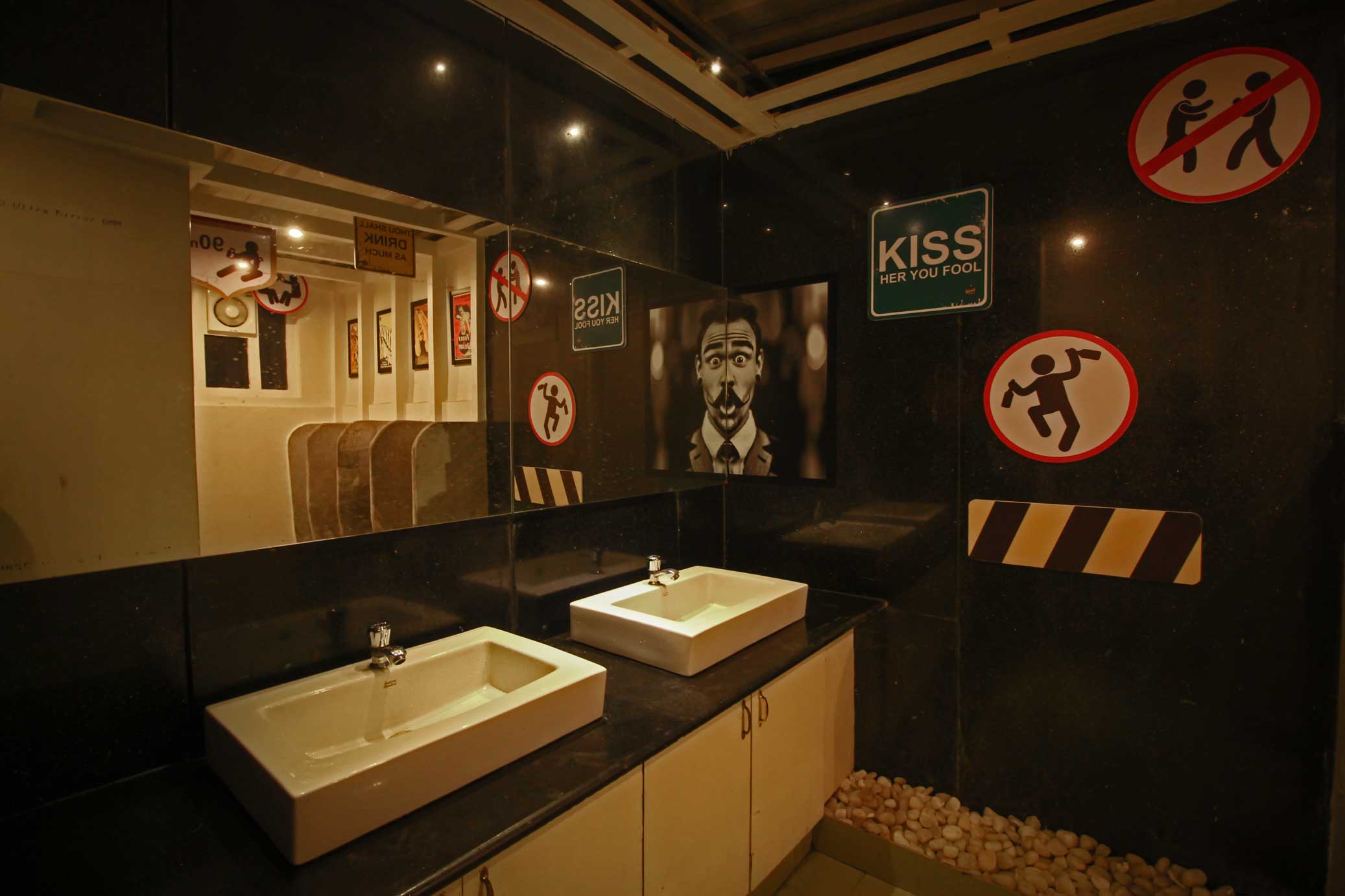 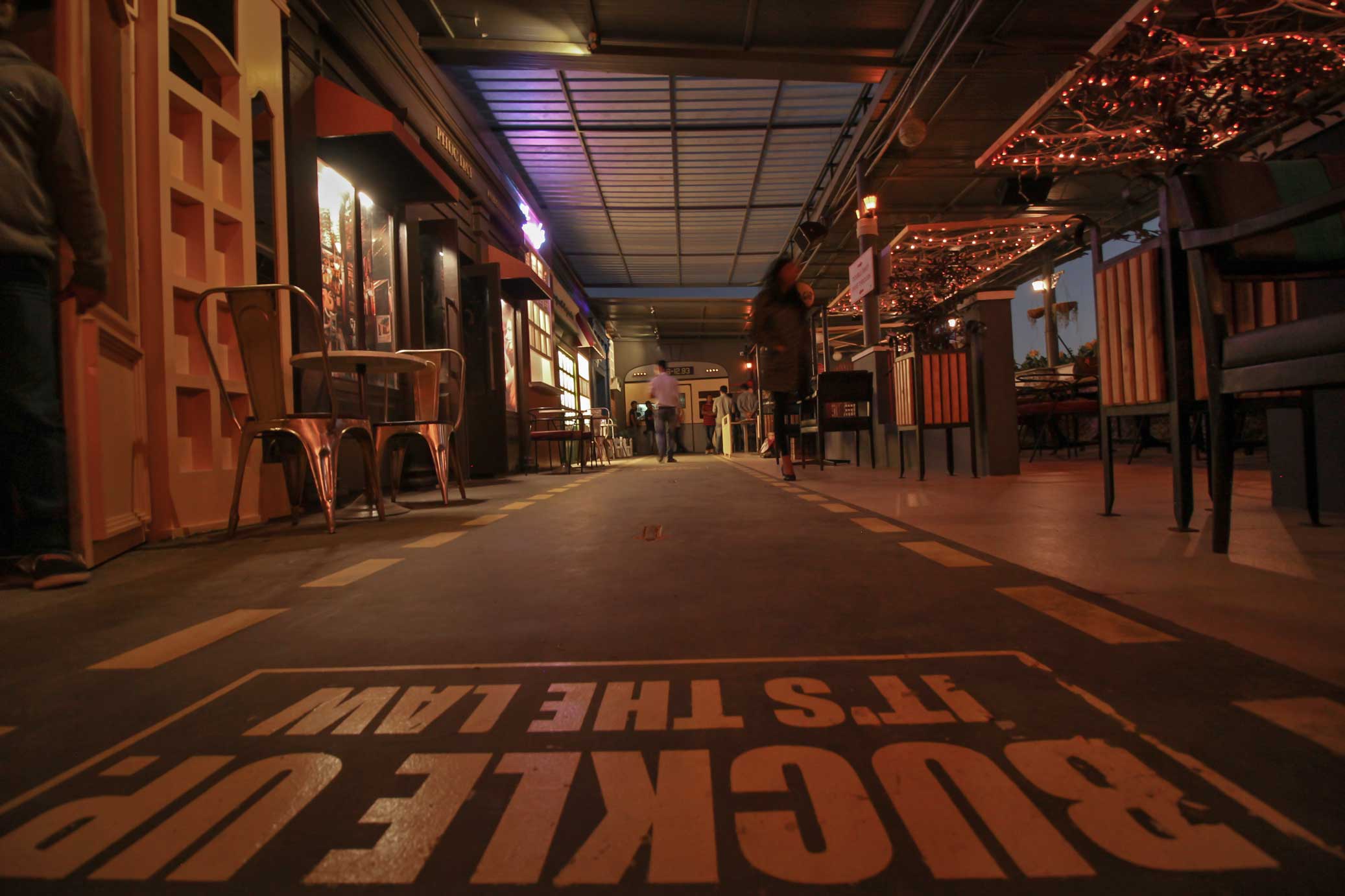 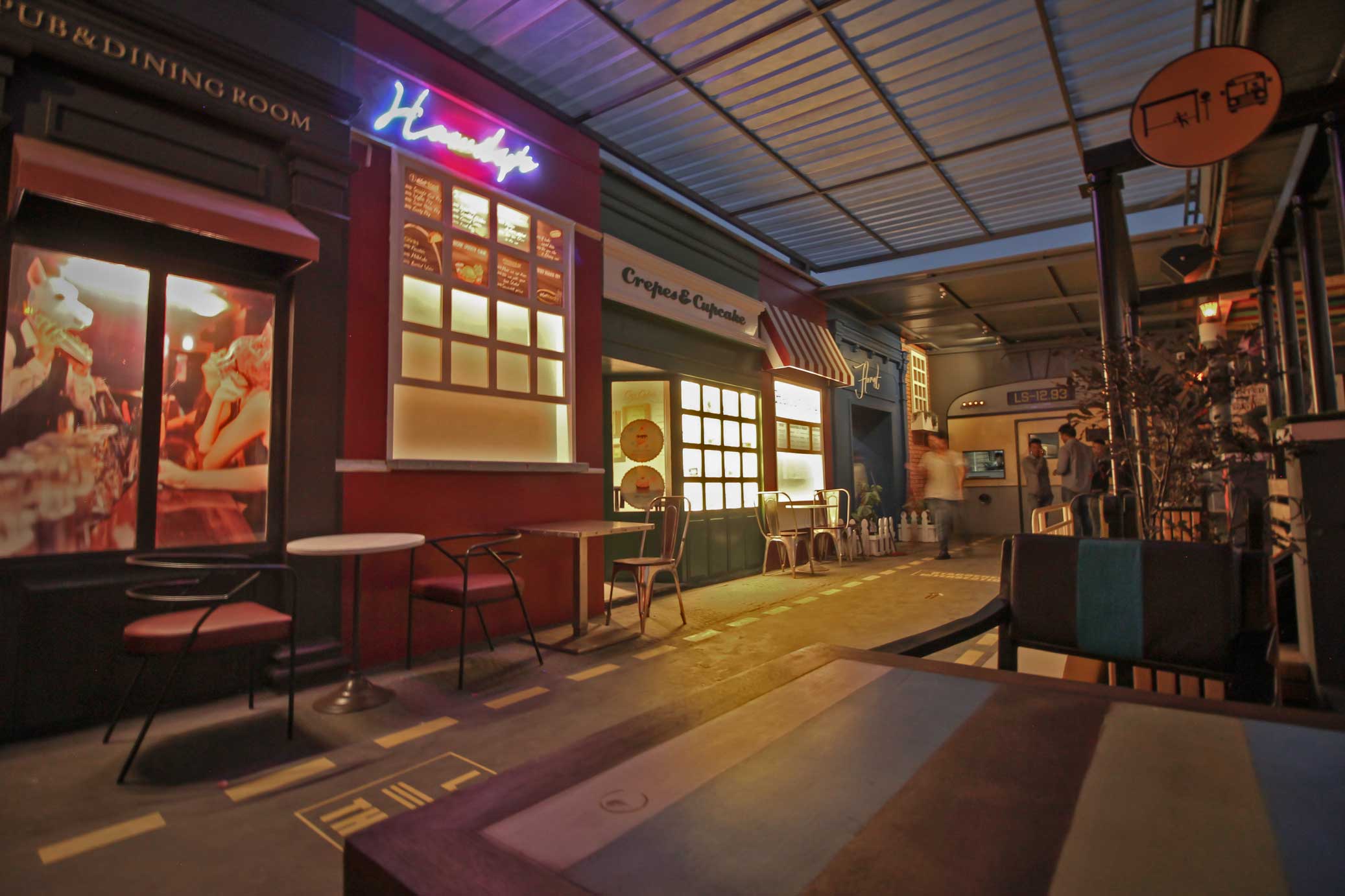 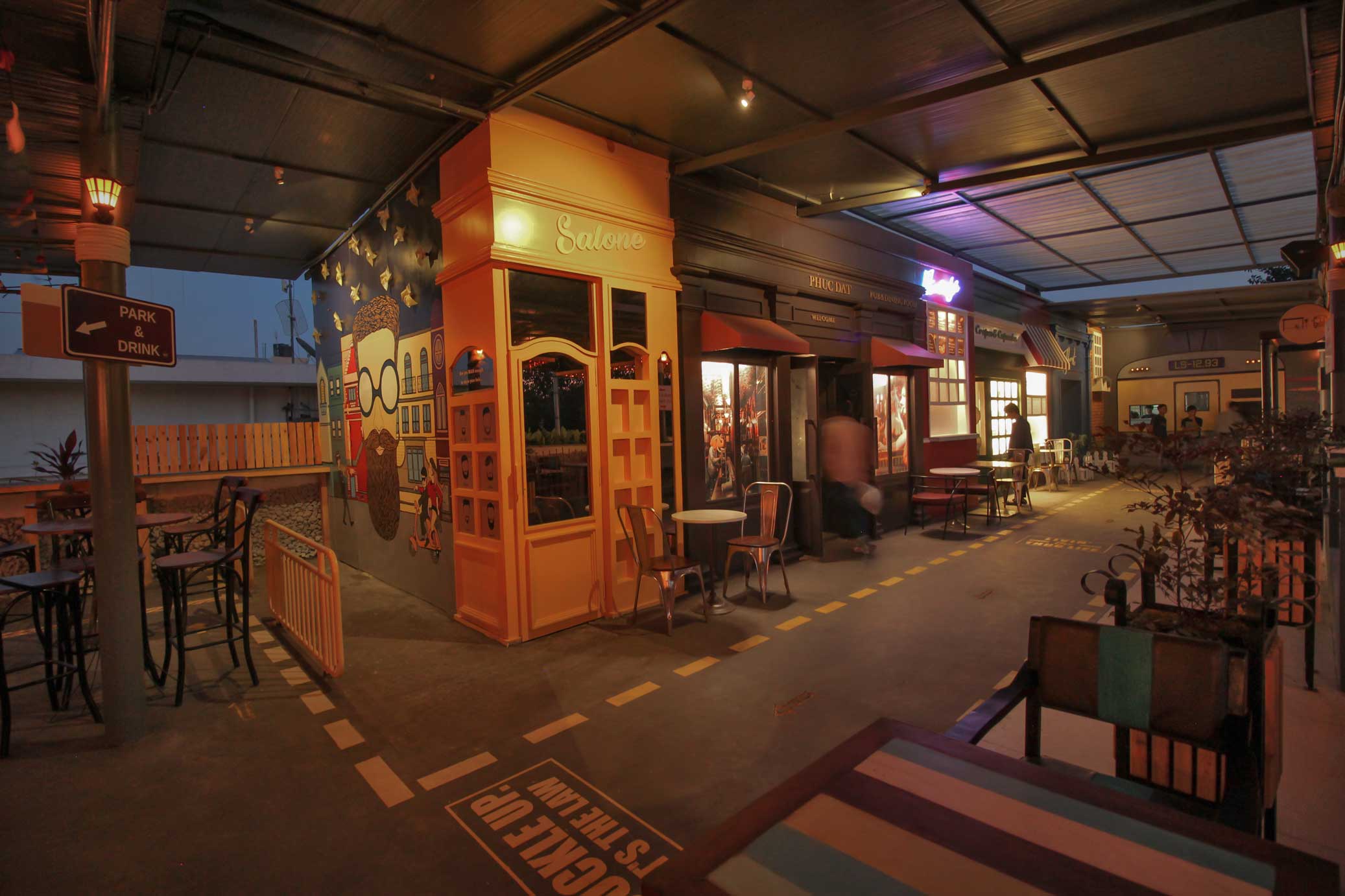 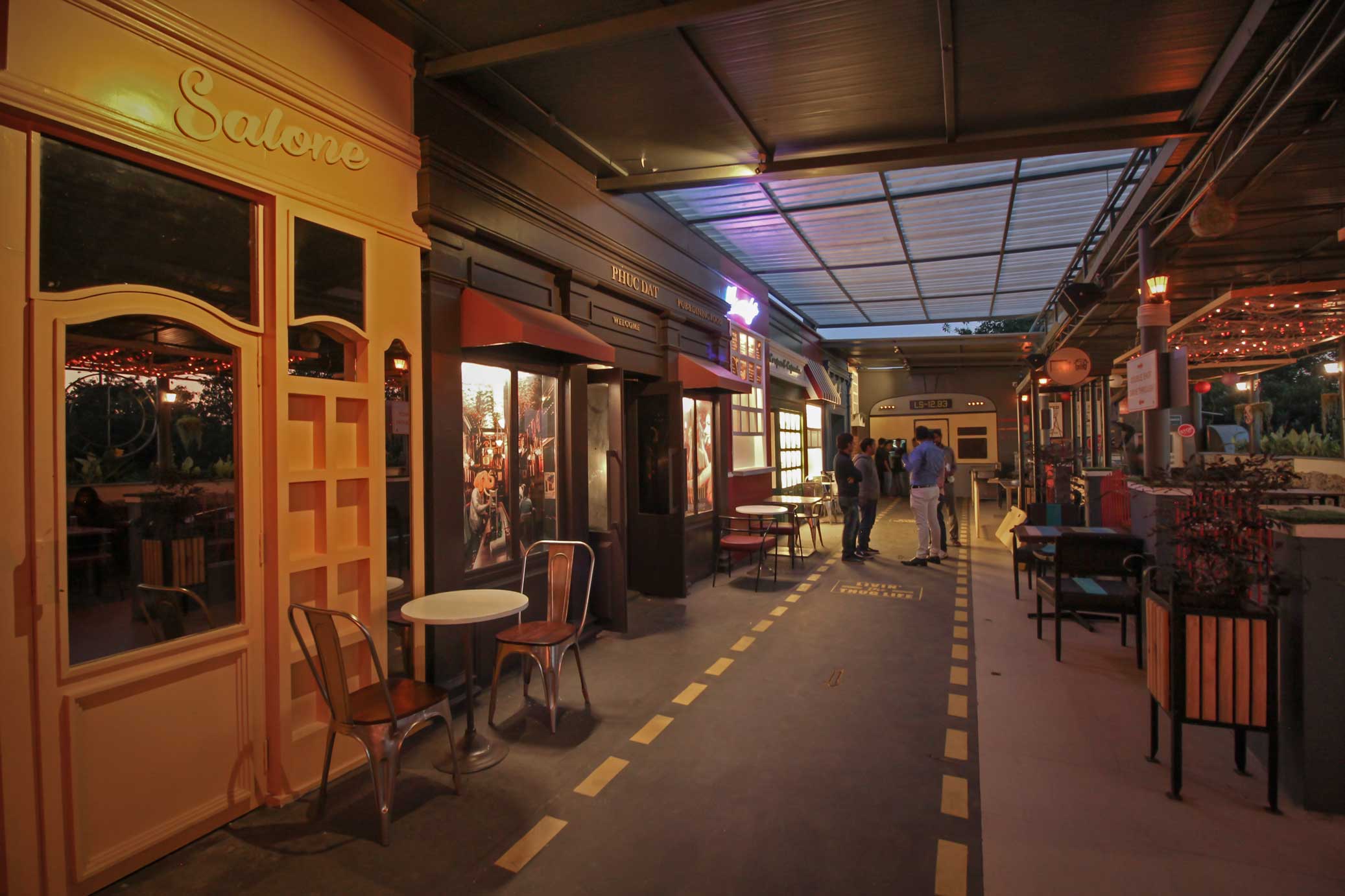 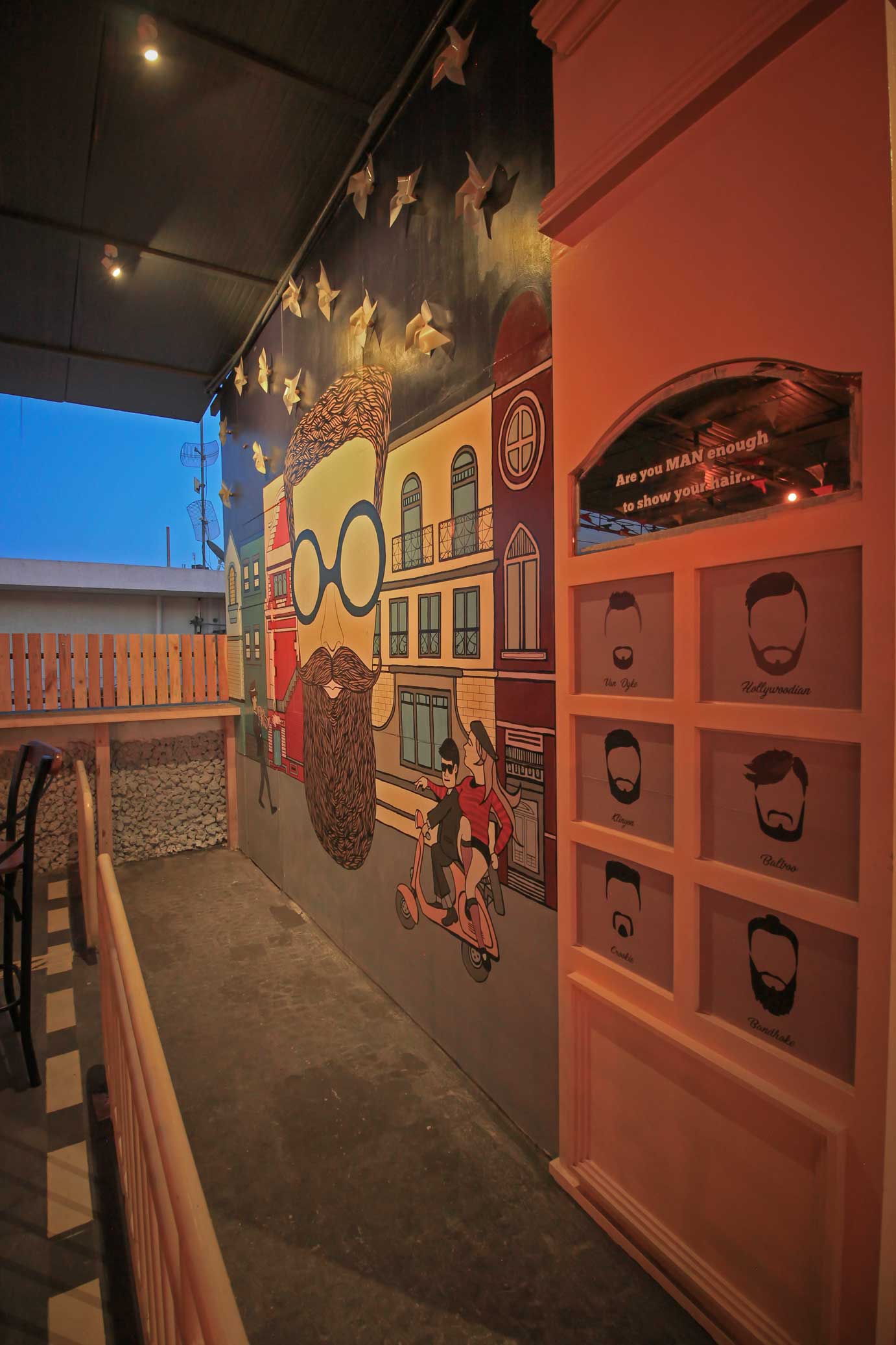 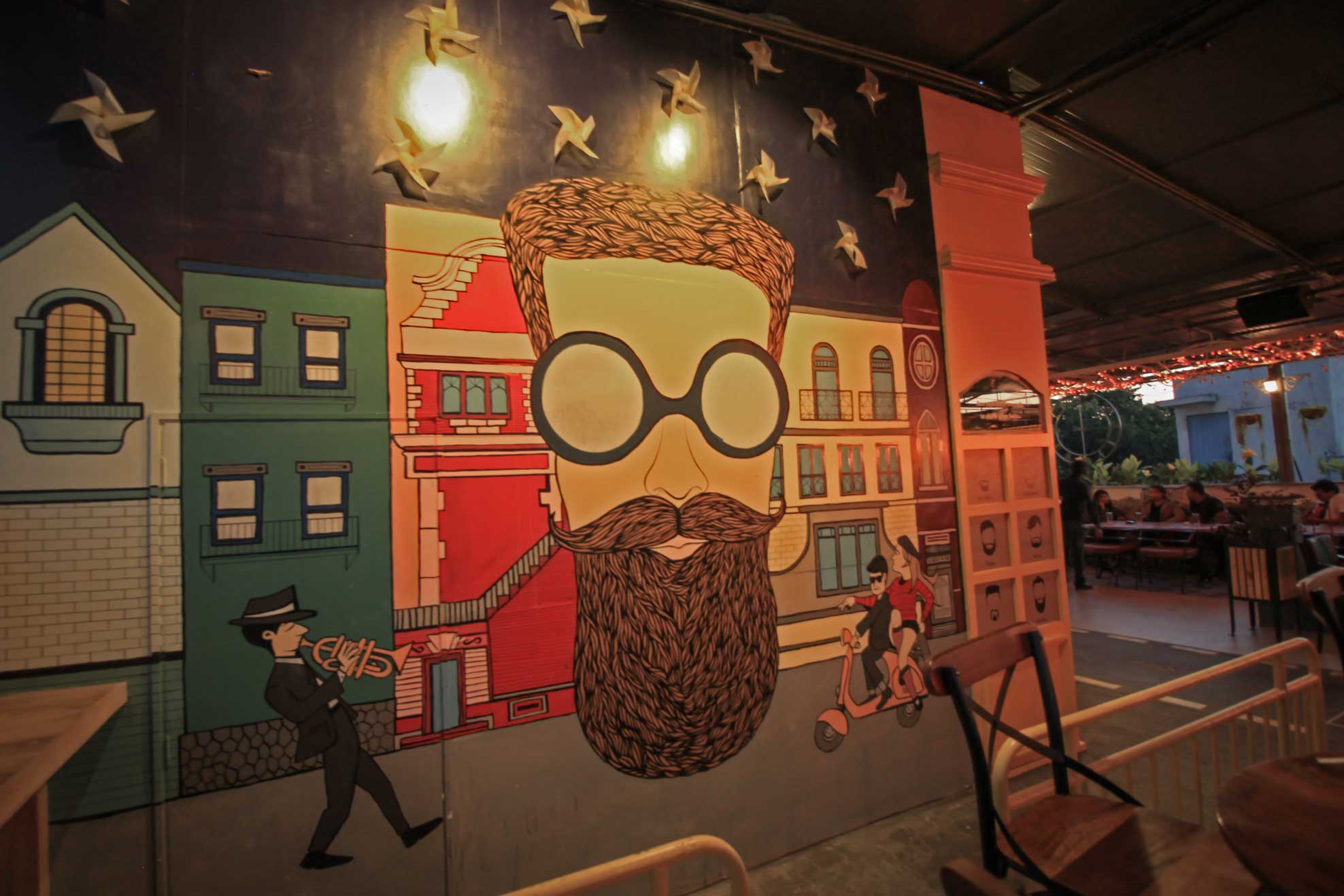 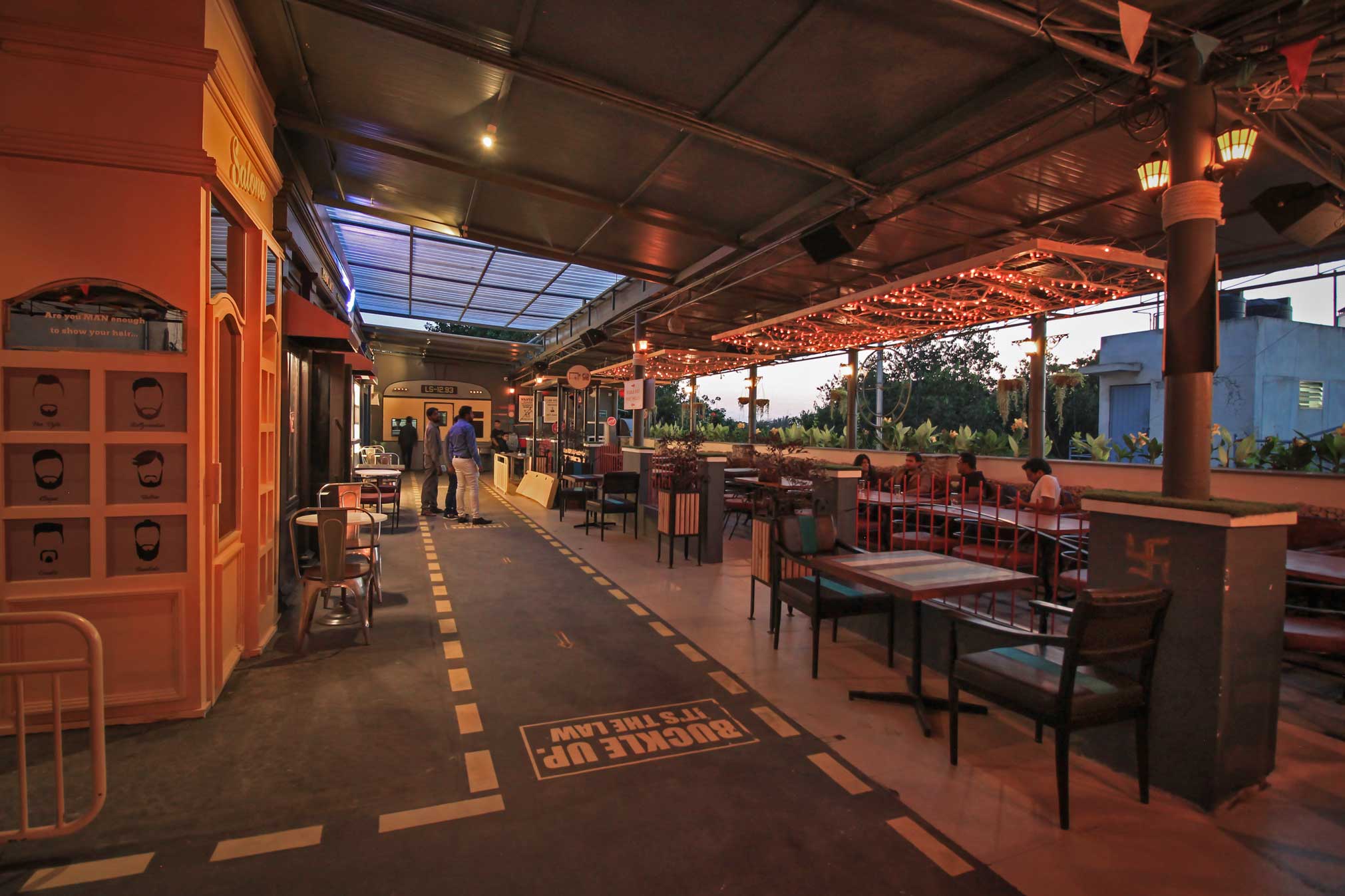 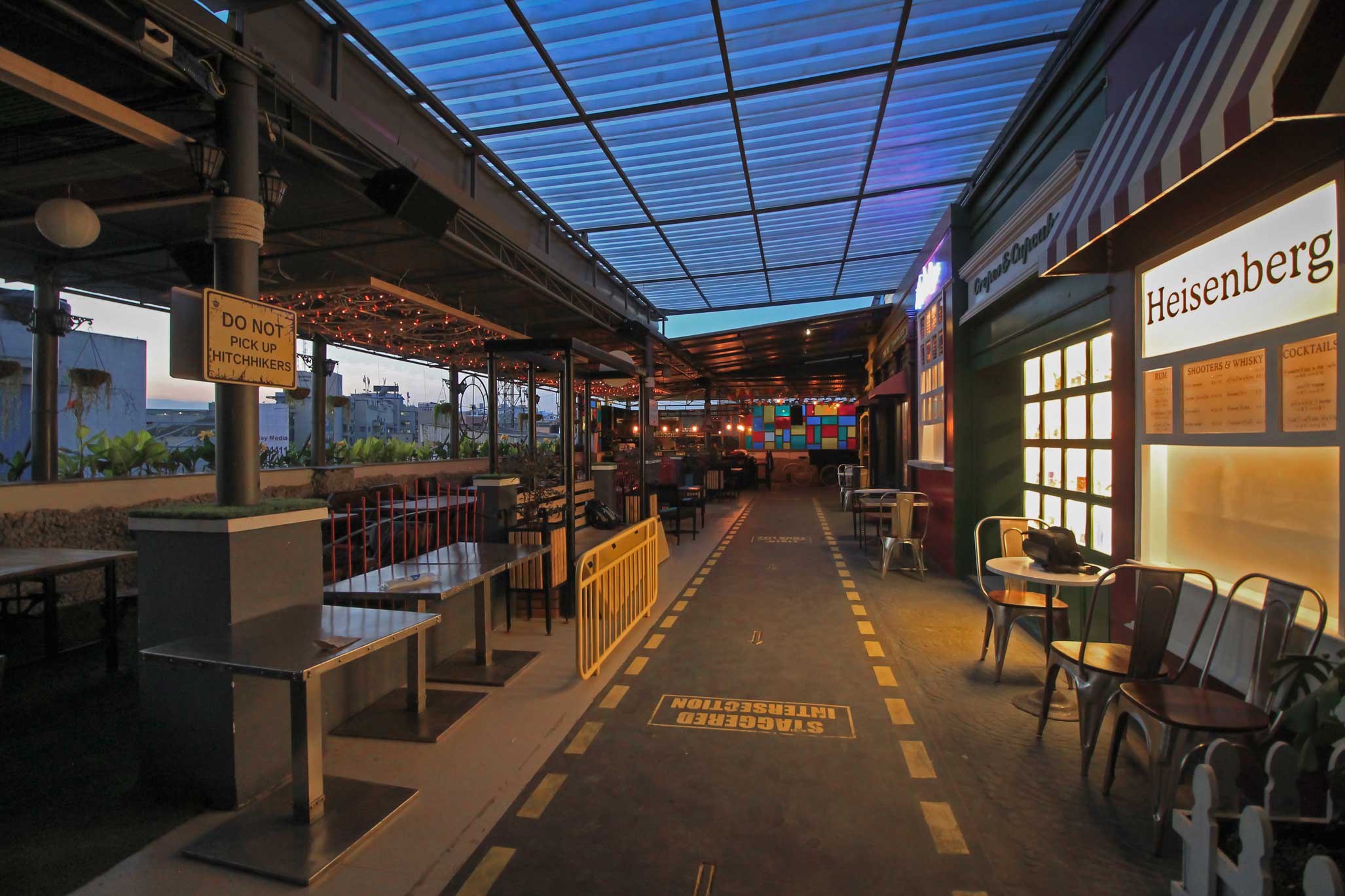 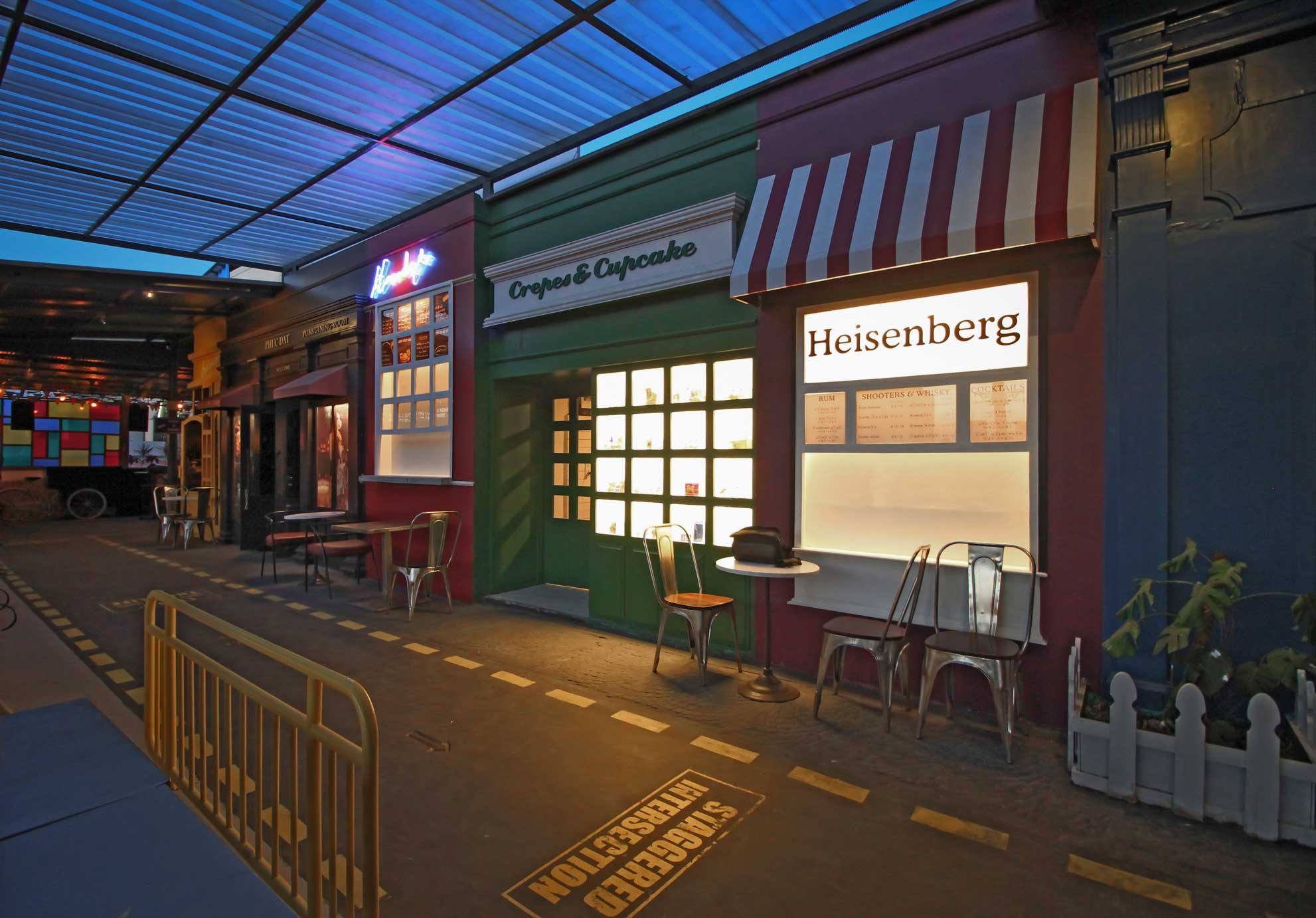 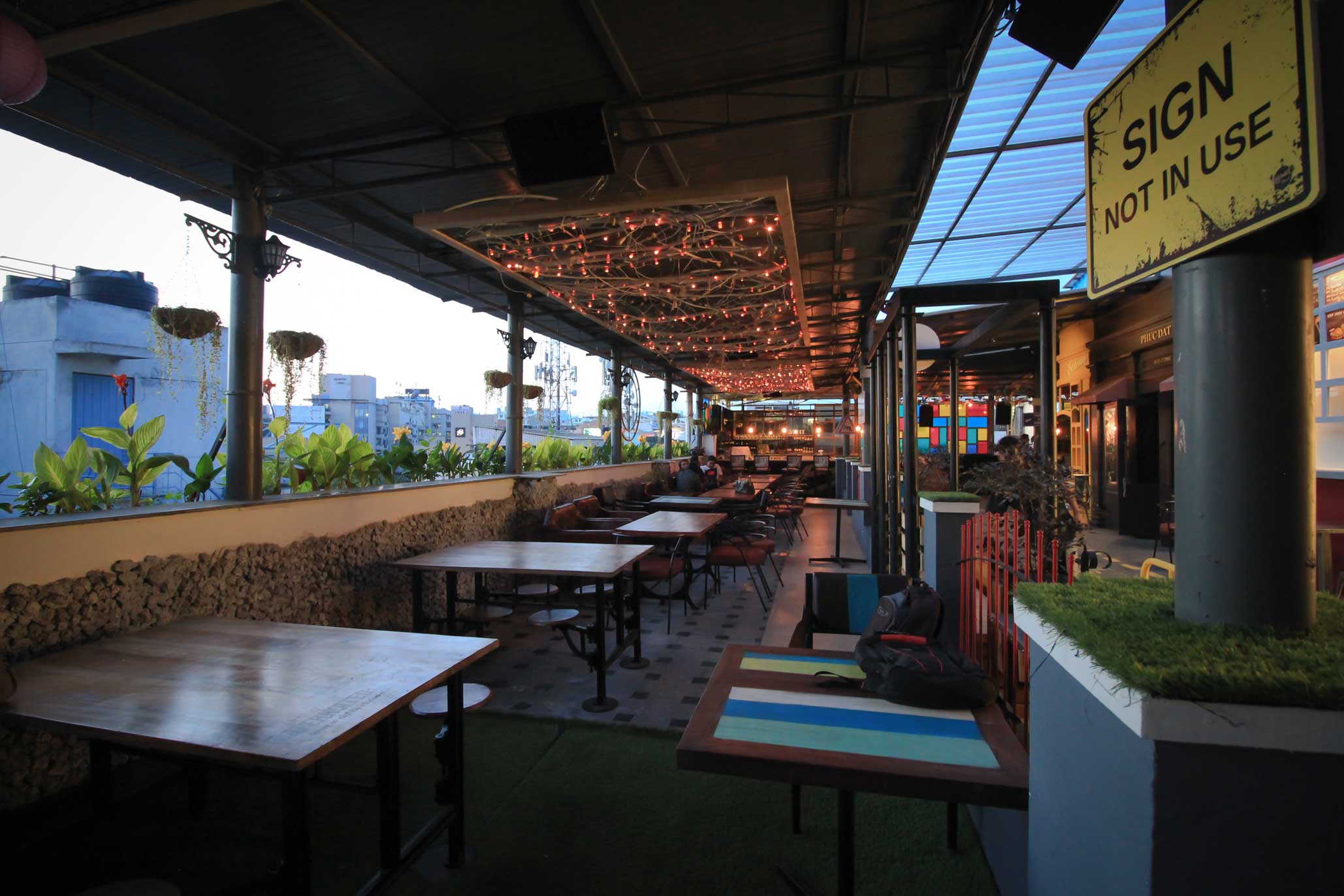 Inspired by the panache of Europe, the entire place is like a road map where there are quirky signposts and ravishing furniture. The place looks amazing all the time, whether it’s the day or the night.

The Street itself was the key concept. So we built one inside the restobar. To one side of the street grocery shops, florists, a bakery, and a quaint tea shop was built. It was flanked by tables and seating on the other side of the street to simulate the alfresco theme of outdoor drinking under a canopy. A cobbled street with lamp posts every 5 meters cut through the centre of the space and even turned into an alley. The facade of all the European-inspired shops had to emulate the real world. For this purpose, we build store displays and even created visual merchandising on each store, giving it context to the theme. The doors on each shop front literally opened to another room, toilet, or some surprise.

Establishing a theme-based pub at the heart of the drinking culture in Koramangala was exciting. We were hoping the concept would go down well with both people who loved the alfresco culture and the ones that were used to the restobars of colonial cues with a twist. It did not surprise us that the result was a sweet success.

"Having fun drinking on the streets? Sounds messy? Not anymore. I'm glad that Rubenius could make that vision of mine come alive. All the fun I had in Europe, is now infused into the ultimate street experience in back in Bangalore." 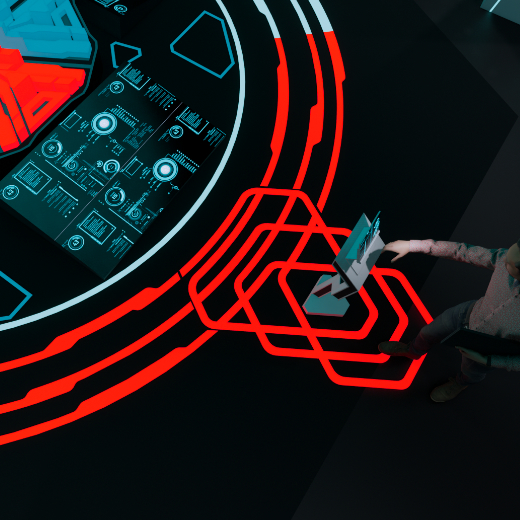 The Bangalore Electricity Supply Company Limited (Bescom) has been in operation for over one hundred years, and is the sole electricity supplier in the city of Bangalore. 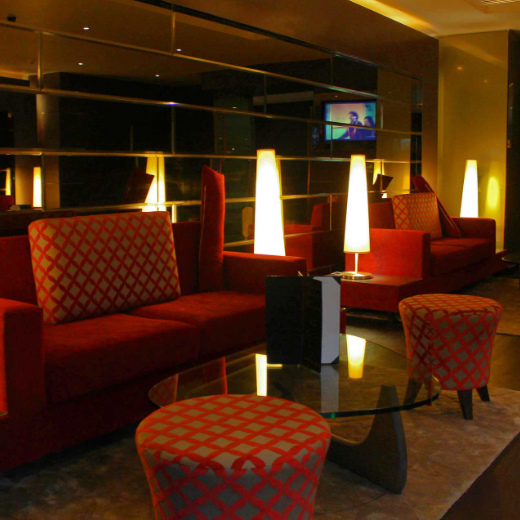 How PVR designed an experience around comfort & elegance

PVR Cinemas (Priya Village Roadshow)[2] is a movie theater chain in India with its headquarter located in Gurgaon. The brand has redefined the cinema industry and the way people watch movies in the country. 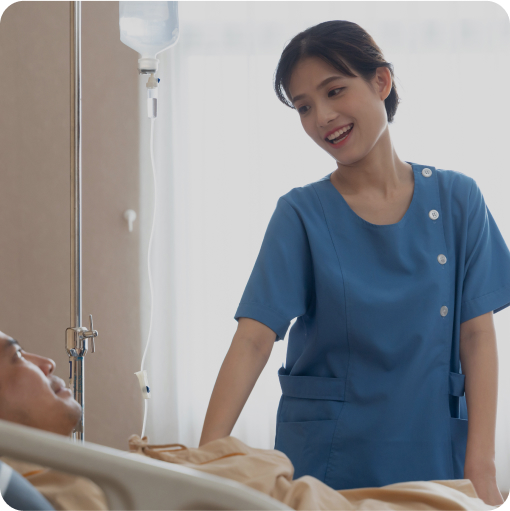 The Hospital for Orthopaedics Sports Medicine Arthritis & Accident Trauma (HOSMAT) is the largest tertiary care hospital serving India and its neighbouring countries and has been a pioneer in sports medicine for over 17 years.